It's the details that make the difference and for Rodrigo Sória, it's the minute details in modeling and lighting, along with his eye for composition that makes his 3D renderings stand out. We caught up with Rodrigo to find out more about what he does and why he uses KeyShot for rendering his designs.

Rodrigo Sória began his career developing 3D models and illustrations for media production companies, lending a difference to their modeling with a touch of perfectionism in his work. He currently works as a freelancer, developing 2D and 3D advertising illustrations, and over that past few weeks has bee beta testing KeyShot 3 using the new rendering features and animation system in his concepts and renderings.

The main works that have already been developed using KeyShot are: Cirrus SR22 Engines, Bugatti Veyron, Watch concept, Ice Cream Machine and many others. In his works he uses KeyShot to increase the speed of creating 3D renderings. Rodrigo states, "KeyShot makes it easy and intuitive to produce your final images, creating a realistic image of high quality."

His latest work, the Cirrus SR22 Engines (shown below), is featured in the KeyShot gallery and has been presented at International Super Computing Conference 2011 in Seattle. It was modeled in Softimage and all the rendering was done in Keyshot to generate the photorealistic appearance that proved superior to other renderers he had tried.

Learn more about the work of Rodrigo Soria at KeyShot.com and see more detail of their images and models on Rodrigo's blog. 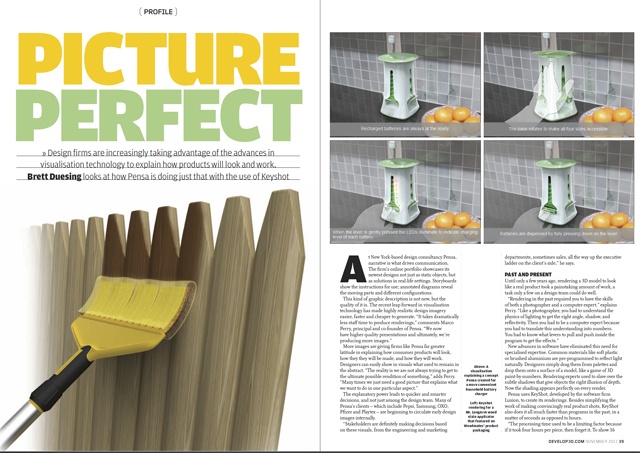 Develop3D Profiles Pensa Design... who Rocks the KeyShot
Next Article
KeyShot 3. Like bringing a Kalashnikov to 9th century sword fight ...and other user comments.