How to Use Solo Mode in KeyShot

KeyShot allows you to easily hide and show parts or groups of parts. When you right-click in the...

Sprout Studios has announced their latest business venture building on their expertise in...

With KeyShot 10, we introduce a new Light Manager to control all your scene lighting from one...

How the 'I Am Mother' Droids Were Born

When you see, I Am Mother, the highly anticipated Sci-Fi thriller from Netflix, you'll notice the eerie natural movement that goes along with the unnervingly eerie voice of Mother. Mother is a robot, designed to repopulate the earth in an extinction event, that is tasked with raising a singular human child from infancy. The robots are central to the story, and though attention to detail can be seen throughout the entire film, it's the droids that have a deep complexity starting from detailed concept designs and turning into rich CG scenes and even a physical suit.

Edon Guraziu was part of the early team helping to define the look of the droids. He was responsible for the Military Droids, their weaponry and the Embryo Gun. He also created an alternate Mother version that has an interesting aspect to it and is 'beefier' than the Military Droids to fit Luke Hawker, who performed in the suit.

For the Military Droids designs, Edon describes them as far more 'aggressive' and 'dark' to support the industrial-military aesthetic with special attention paid to the mechanics. "It was necessary for the joints and hydraulics to be designed properly so they did not clip or cause clearance issues," he explains. "Especially with some brief close-ups during the film, the functionality had to be held to a much higher standard and be functional and believable."

If you've not seen the movie yet, you'll get a better appreciation and deeper understanding of the exacting detail and visual complexity in the official trailer:

How did it all start? In 2016, Director Grant Sputore reached out to Edon and asked if he wanted to help with a movie pitch. "I said yes, created several designs and hoped for the best," Edon tells us as he describes how the droid design was born. "Little did I know Grant would reach out to me a year later with the news the film had been green-lit. In 2017, I spent time creating designs ranging from robotics to smaller-scale devices." 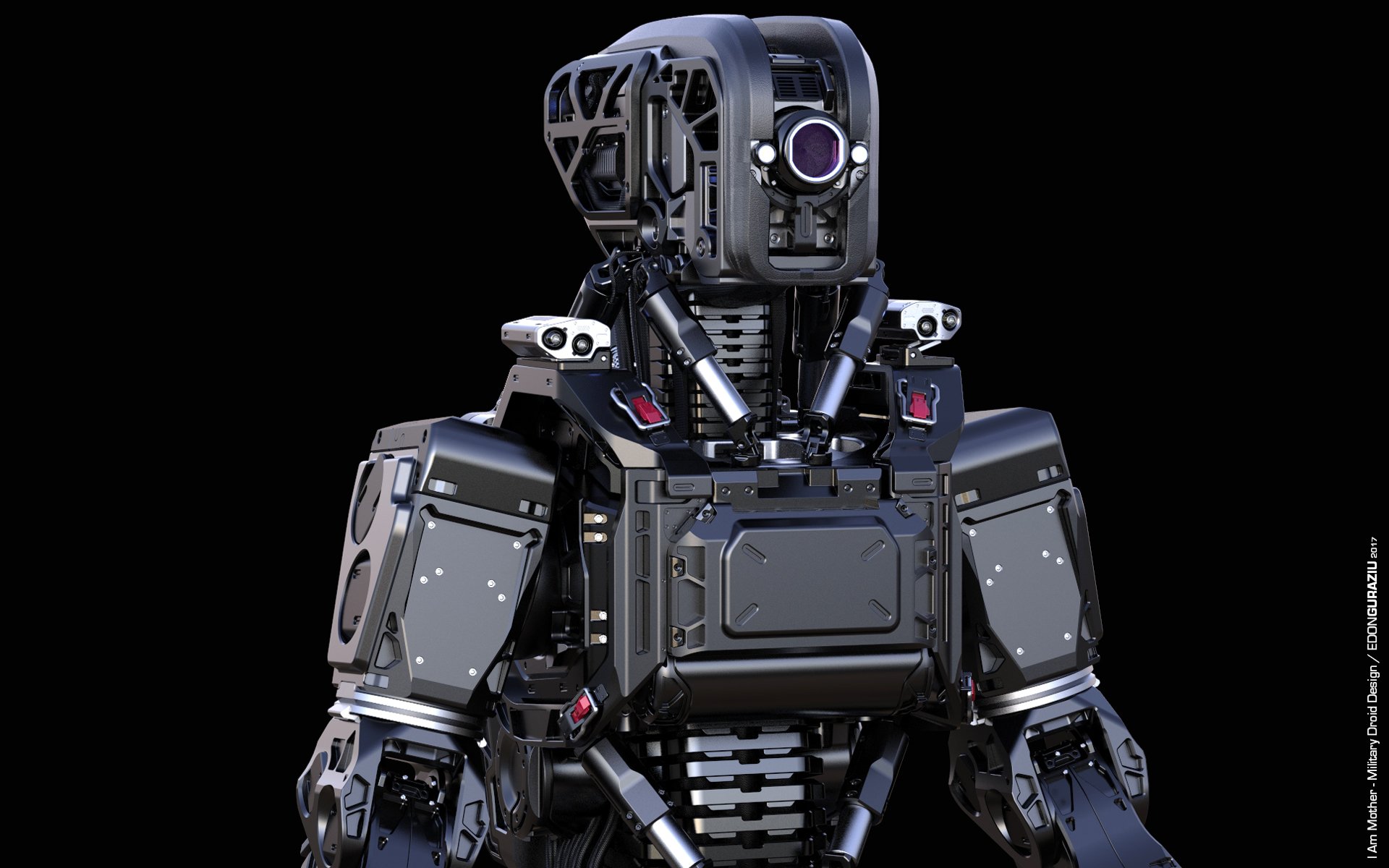 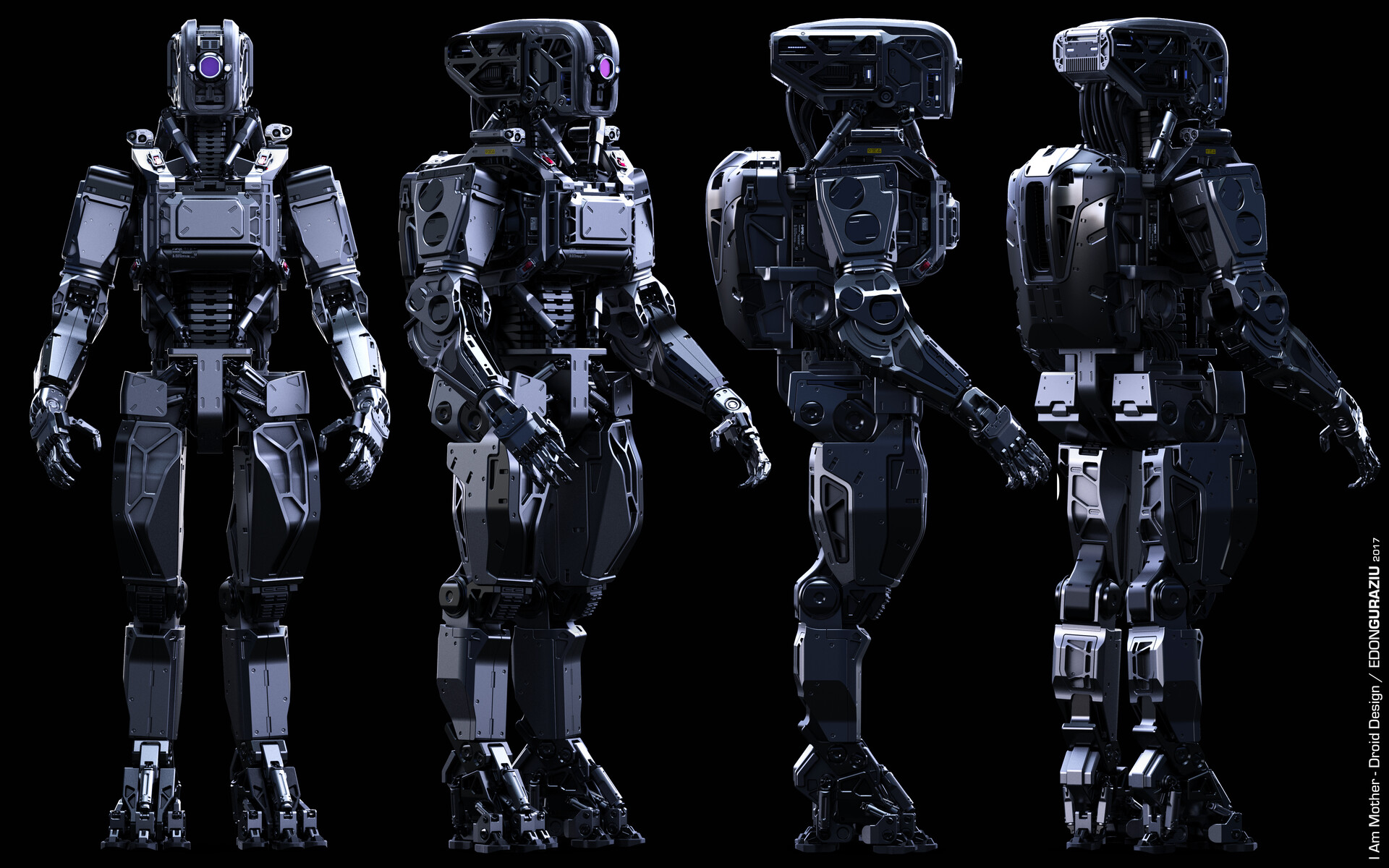 All in all, KeyShot is one of the most important tools in my arsenal as it provides unparalleled speed and efficiency in communicating designs with my clients."

Edon's process begins with exploring the concepts with 3D models. As he described to us in a previous interview, he uses MoI3D to create unique, complex forms and Maya for Sub-D modeling and making refinements. For I Am Mother,  KeyShot was used all along the way.

"From the beginning, KeyShot was a fundamental tool that allowed me to quickly render work-in-progress shots for the director to see and explore options in real-time," Edon explains. "As the designs were refined over time, KeyShot was used to deliver the final photorealistic image renders in high fidelity" 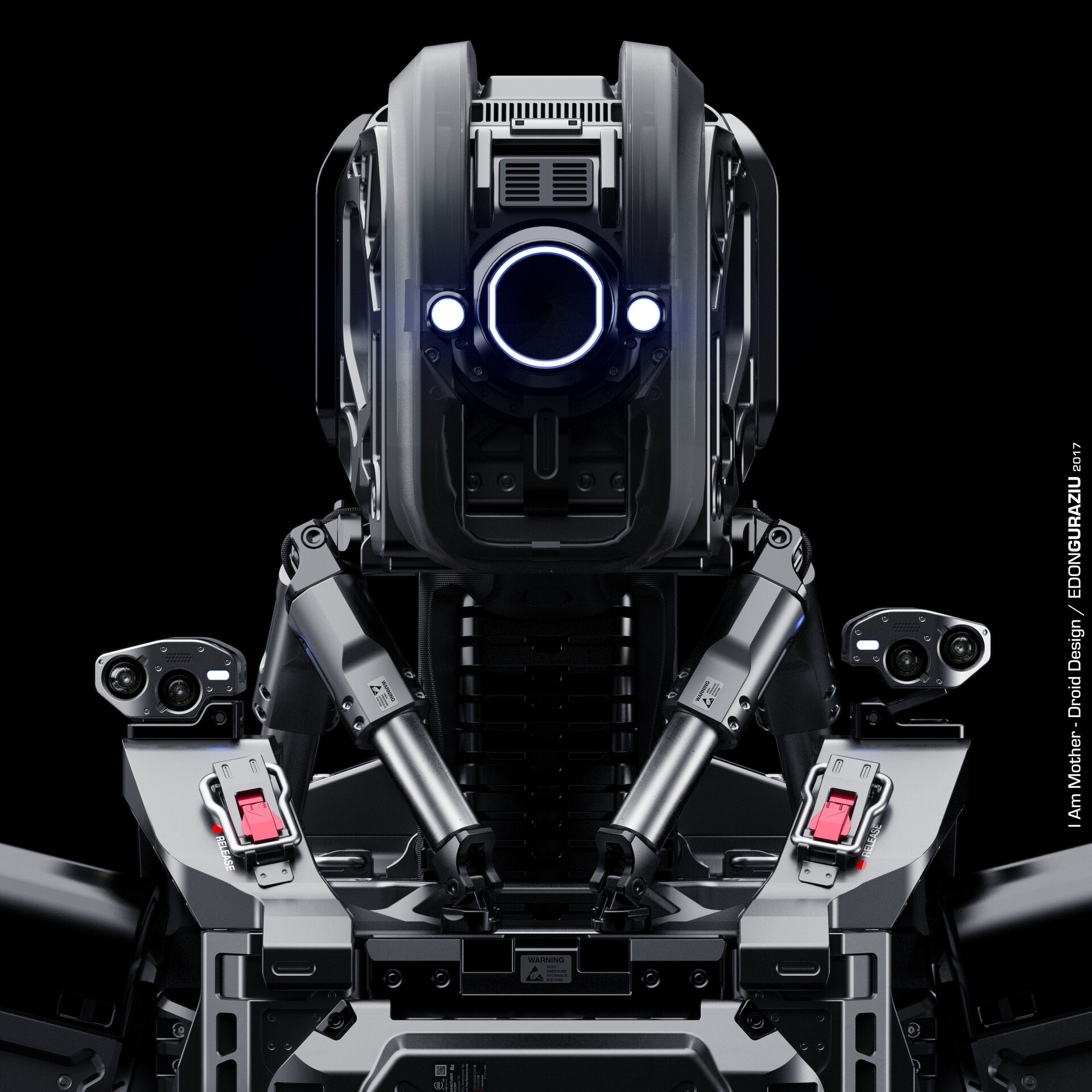 Among the features Edon used, multiple HDRI’s and Custom Studio Environments helped to communicate different lighting scenarios, materials, and focal lengths. He used the Labels feature to add an extra touch of realism to the visuals, which eliminated the need for post-processing in Photoshop and adding them manually for every different render. "All in all, KeyShot is one of the most important tools in my arsenal as it provides unparalleled speed and efficiency in communicating designs with my clients." 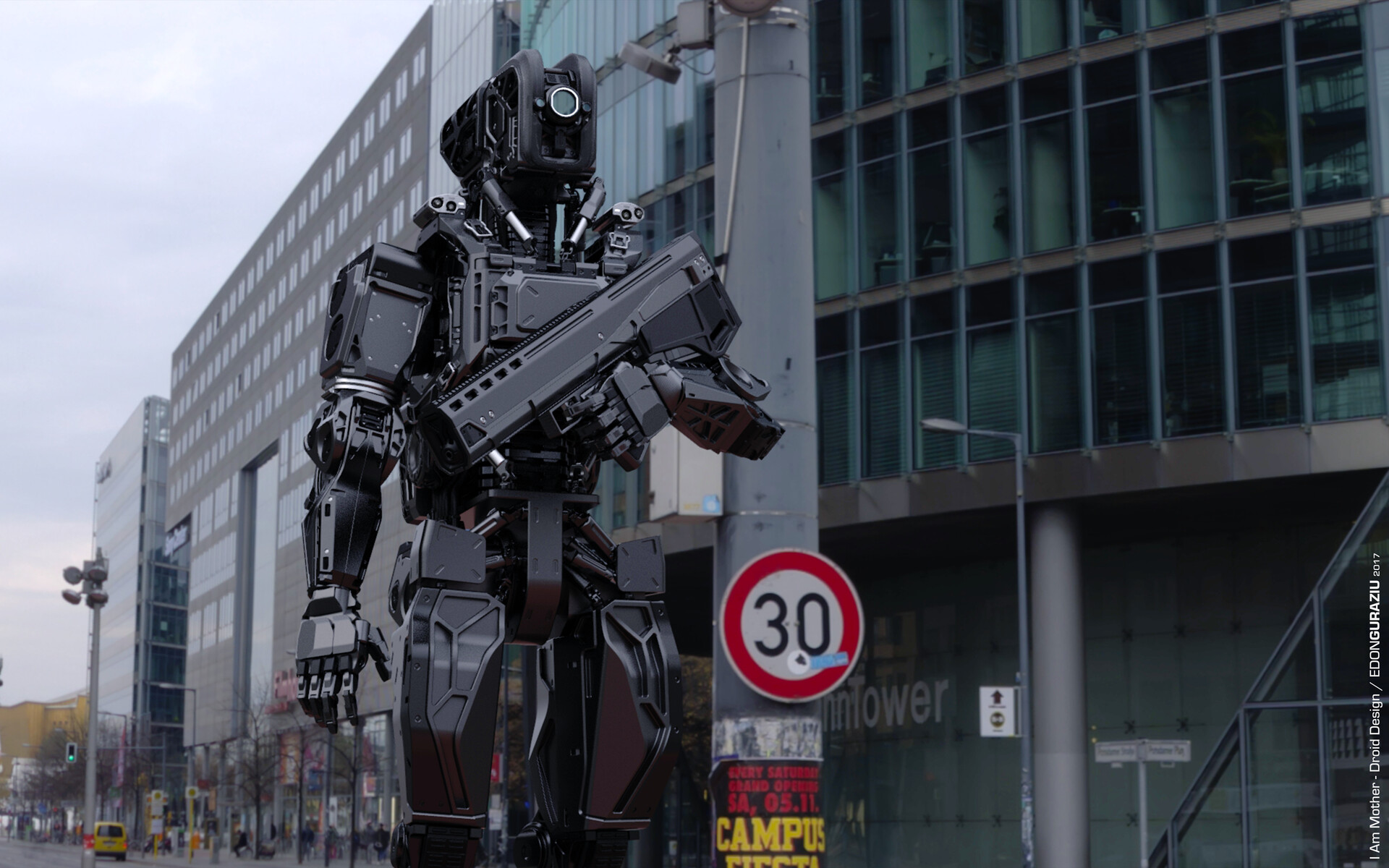 Once again, this included creating custom product labels and warning signs for the droid and device. "Using the Label and Material features in KeyShot, I could easily add all the graphics to the models and render them in good lighting. This proved to be important to streamline the VFX pipeline and ensure the quality of the designs on-screen." 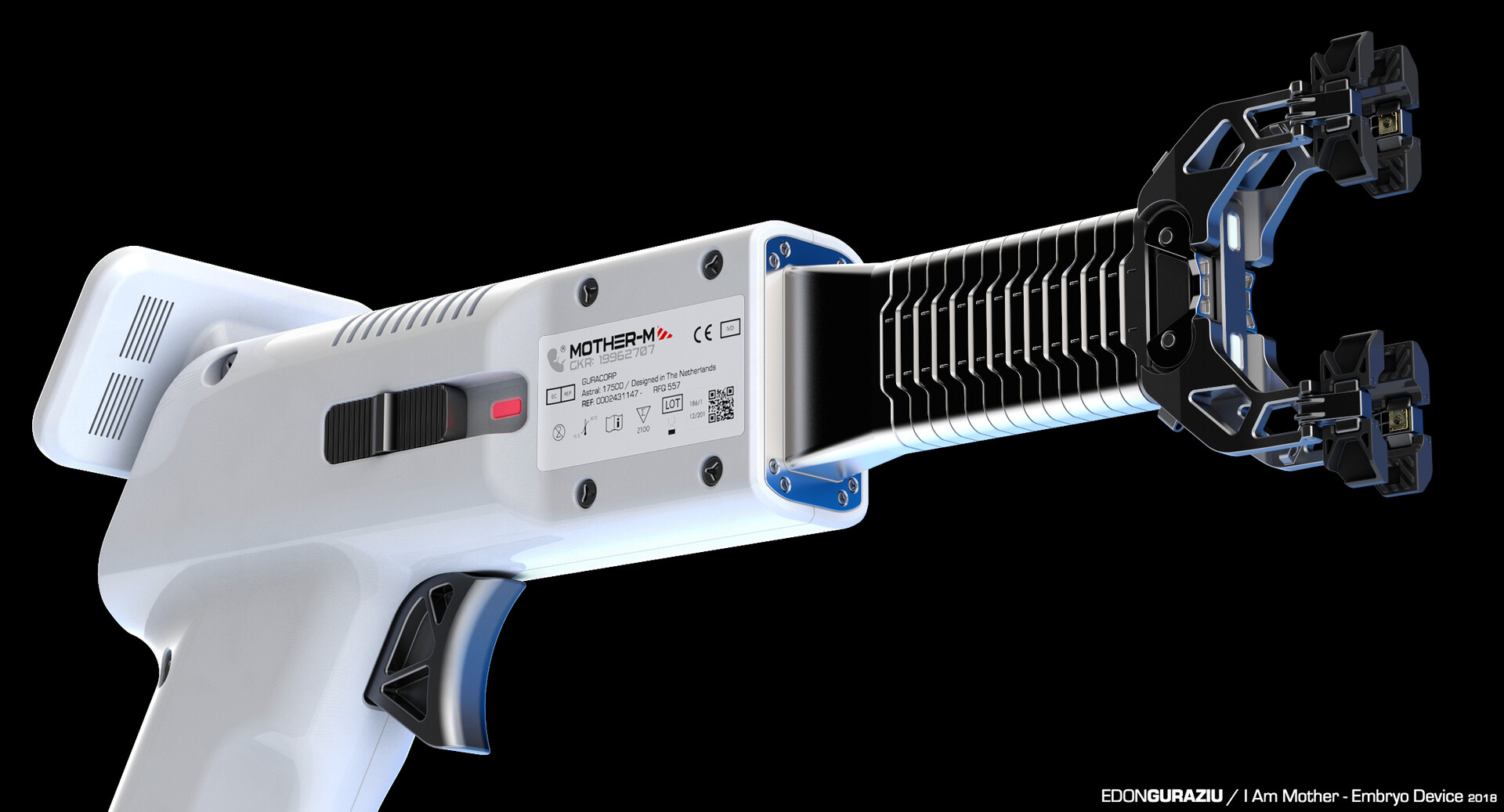 From the CG team at Fin Design to the physical robot suit designed by Weta Workshop, making a film is a huge undertaking that goes smoother when the right tools are available and the right team. "Working with FinDesignVFX and VFX Supervisor Chris Spry was a great experience and I would like to thank them again for the amazing work their team has accomplished."

Learn more about the CG process by Fin Design here and how Weta Workshop constructed the physical suit here. You can see more of Edon's work on his Artstation page and at edonguraziu.com. And, if you're interested in learning from Edon, be on the lookout for new models and tutorials coming to his store soon.