Today, we’re sharing the news of a new era coming to KeyShot and to KeyShot users around the world. With KeyShot 9, you will gain the ability to harness the full GPU-accelerated ray tracing power of NVIDIA RTX with OptiX. We'd like to share more on this decision, how it will work, and what you can expect with the approach we've taken to put you in complete control of your rendering workflow.

A Focus on Flexibility

“Luxion has evaluated GPU rendering for several years. With NVIDIA’s RTX technology, GPU-accelerated hardware ray tracing and AI denoising, gigaray performance, NVIDIA Quadro GPUs with over 8GB of memory, and the free OptiX SDK, now is the time to do it.”
- Henrik Wann Jensen, Co-founder and Chief Scientist at Luxion

Though the addition of GPU rendering might be seen as a shift away from one rendering method in favor of another, it’s anything but. We’ve brought CPU and GPU-accelerated rendering capabilities together in such a way as to give you complete control and a choice over what powers your rendering workflow. And the implementation within KeyShot is, in a word, seamless, with the ability to switch between CPU and GPU without affecting your current workflow, requiring unexpected hardware upgrades, or forcing you to choose one rendering method over the other—it's complete flexibility to utilize the most performance whether you have multiple CPUs or multiple NVIDIA GPUs.

Traditionally, KeyShot has been known as a stand-alone CPU-based real-time ray tracing renderer. But here are some things you may not know. First, KeyShot is the first stand-alone, real-time ray tracing software. At its core (no pun intended), KeyShot is 100% real-time—it’s not a switch or a mode. Secondly, KeyShot’s render engine is developed internally by us, Luxion. We’re not dependent on other software or hardware development. Lastly, the KeyShot render engine is based on decades of research in global illumination and lighting simulation by Luxion Co-founder and Chief Scientist, Henrik Wann Jensen. And that research continues to this day.

Since we develop KeyShot from the render engine to the interface and all the features in between, it allows us to 1) optimize for speed, quality, and accuracy and 2) reduce dependence on other hardware or software. Our focus has always been focused on providing the best experience possible, taking advantage of whatever resources are available. KeyShot is designed to run and provide brilliant results on the widest array of computers, whether Windows or Mac, desktop or laptop, with support for the widest array of 3D file formats of any 3D rendering software. This all comes together to ensure 3D professionals have the absolute most flexibility available while not compromising speed, quality, and accuracy.

With an internally developed render engine and the in-house expertise in advanced rendering techniques and graphics hardware, we have the freedom to constantly evaluate the latest CPU or GPU technologies. So, when the question, “Why doesn’t KeyShot use the GPU?” came up in the past, the answer was simple - relying solely on the GPU would compromise the speed, quality, and accuracy of the visuals for the 3D professional. Now, with the advancements in GPU acceleration, through the real-time ray tracing capabilities provided by the NVIDIA RTX GPUs, the speed and performance exists to bring you GPU rendering capabilities in KeyShot.

The Best of Both Worlds

KeyShot's GPU capability is native, out-of-the-box support for all the technological achievements provided through the NVIDIA OptiX ray tracing engine—It’s not a separate KeyShot installation, it’s not a plugin or a patch. It’s the best of both worlds, CPU and GPU together, all within the most intuitive user interface for 3D rendering  and animation. So, if you want to ask, “Does KeyShot use CPU or GPU?” Either, or. We let you make that decision.

“KeyShot was finely tuned for OptiX integration. Our development team was able to quickly show KeyShot with GPU acceleration and where performance could be gained, which further convinced us to move forward with support for NVIDIA RTX.”
- Claus Wann Jensen, Co-founder and CEO at Luxion 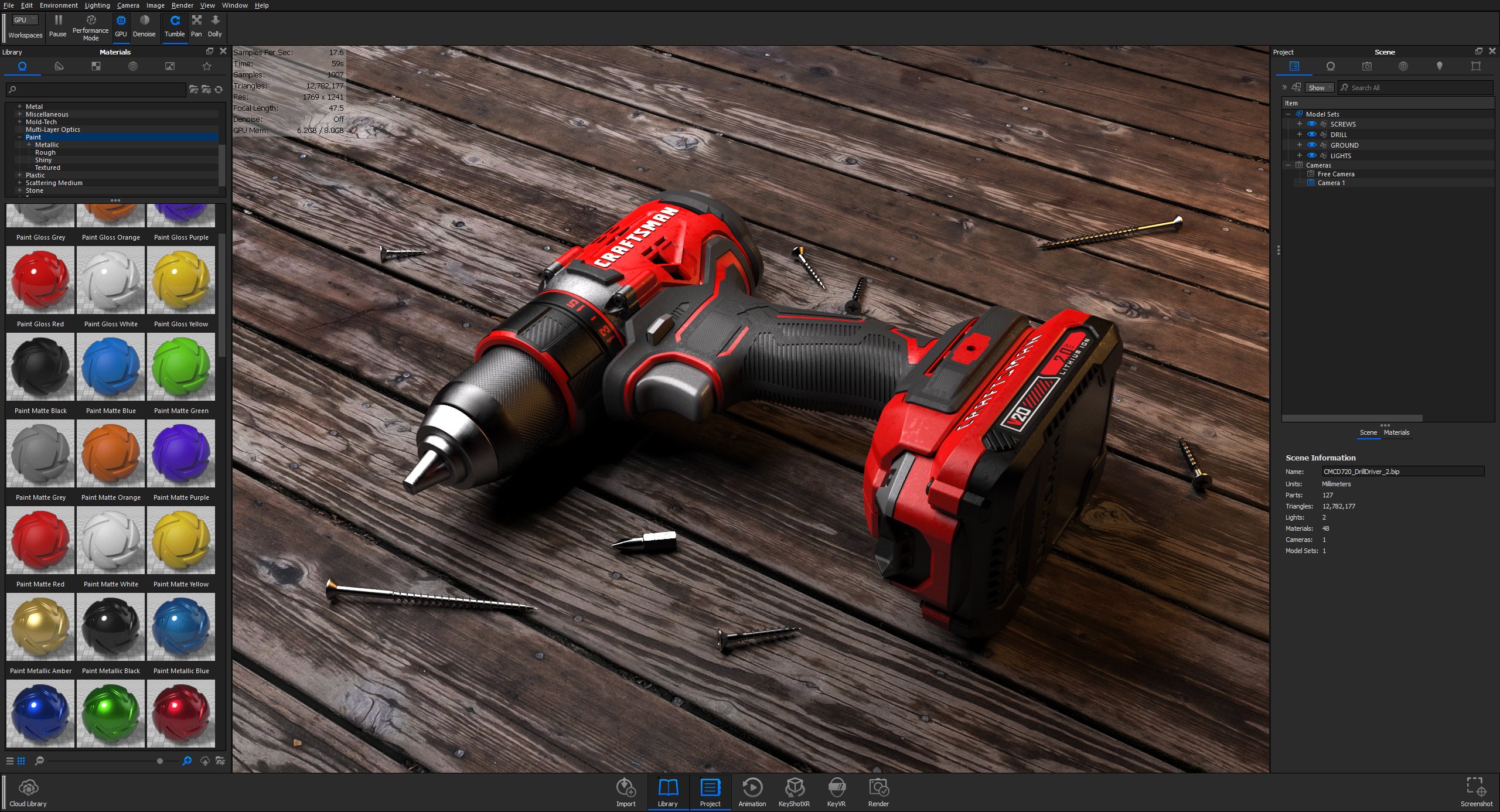 What NVIDIA GPUs Are Supported?

When you start KeyShot on your workstation or NVIDIA RTX Studio laptop, and it detects a compatible NVIDIA GPU-accelerated graphics card, you’ll see a new button on the KeyShot Ribbon. When activated, the scene in the Real-time View and the rendered output will be rendered on the GPU instead of CPU. It’s that simple. When you want real-time rendering using your CPUs, use your CPUs. When you want to use your GPUs, use your GPUs. It's all up to you.

Though this will be the first year you will experience KeyShot with GPU-accelerated ray tracing, Luxion has a long history of GPU research, evaluation, and development. We're very excited to say that KeyShot makes full use of NVIDIA’s OptiX ray tracing engine to achieve high performance, real-time ray tracing on the GPU. This support brings transparent scaling across multiple NVIDIA GPUs along with the hardware-accelerated ray tracing using RT Cores and the Tensor Core AI denoising capability. Above all, we’ve found that the real-time ray tracing provided by NVIDIA’s Turing-based line of RTX GPUs is exceptional for simulating the physical behavior of light and provides incredible performance increase for scenes with complex geometry.

Why did we decide to implement support for NVIDIA’s GPU-accelerated real-time ray tracing now? The short answer: NVIDIA RTX technology provides the real-time rendering capability needed to deliver speed, quality, and accuracy. The longer answer: With the NVIDIA RTX GPUs that bring together both software and hardware-accelerated real-time ray tracing, it’s the first time GPU technology has been able to offer the results that provide the quality and performance to meet or exceed that of the CPU in calculating the advanced algorithms needed for greater realism with real-time rendering. Simply put, the power is there.

Now is the time and we’re excited that GPU technology has matured to the point where we can introduce additional rendering capabilities and performance with the speed and quality of results that you’ve come to expect from KeyShot.

Next week, July 30th - August 1st, we will be exhibiting at SIGGRAPH 2019 at the Los Angeles Convention Center. You can find us at booth 932 in Level 1, South Exhibit Hall, Hall G where we will be showing KeyShot 9 running on an NVIDIA RTX Studio laptop. RTX Studio laptops are the first to support real-time ray tracing and advanced AI capabilities. We will also have demos at NVIDIA booth 1313, and AWS booth 1203. More details are available here.

Enjoy Both KeyShot CPU and GPU-Accelerated Rendering
While committed to increased flexibility, KeyShot's commitment to CPU rendering has not changed. KeyShot will now be able to utilize all the GPU power you can afford, but it’s not dependent on the GPU to create accurate visuals. You have the choice to use CPU or GPU whenever you decide.

Support for NVIDIA Maxwell Generation and Above
KeyShot will natively support all NVIDIA graphics cards able to utilize the new Optix 6 technology which includes all NVIDIA GeForce, Quadro, and Tesla products. Note that GPU hardware acceleration with utilization of RT Cores for real-time ray tracing and Tensor Cores for AI denoising is available in NVIDIA RTX products.

GPU-Accelerated Rendering With a Flip of a Switch
To use your NVIDIA GPUs with KeyShot there’s no need to buy a different version of KeyShot or install a plugin. Simply install any version of KeyShot and, when a compatible NVIDIA GPU is detected, click the button to activate GPU rendering.

NVIDIA GPU Support in KeyShot 9 and Above
GPU-accelerated real-time rendering using NVIDIA RTX graphics cards will be available with the release of KeyShot 9 (currently in beta) and slated for release in the Fall of 2019. A separate version of KeyShot will not be needed and there will be no additional cost.

How the 'I Am Mother' Droids Were Born
Next Article