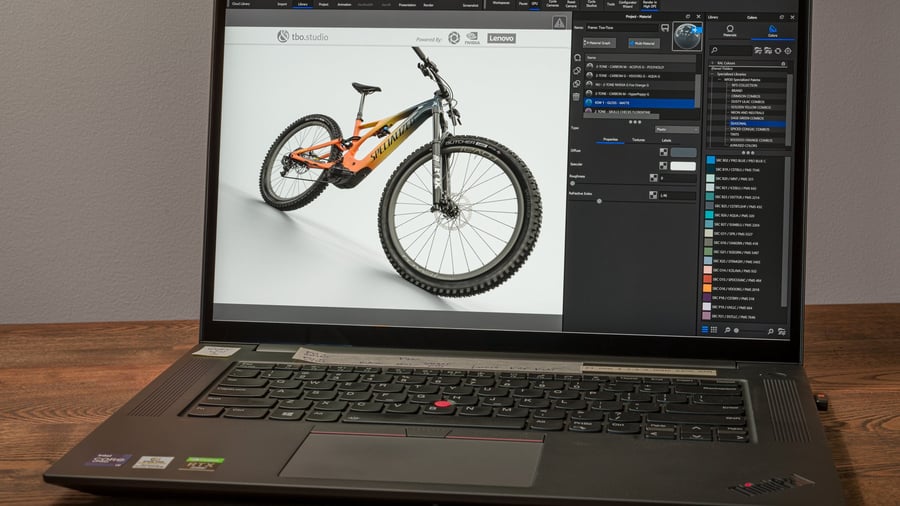 The relationship between Thomas Burke & Others (TB&O) and NVIDIA goes back to the testing of pre-production RTX family products. In the course of discussing the idea they had for solving a product design challenge, NVIDIA introduced them to Lenovo.

It begins with the Design Visualizer. This is a 2D to 3D workflow developed by TB&O with the help of the designers at Specialized Bicycle. The process allows the teams to toggle between 2D design applications like Adobe Illustrator and real-time 3D visualization in KeyShot. Designers working on colorways, graphics, and picking material finishes were doing most of their work in a 2D program like Illustrator. It’s what they know; it is what they are comfortable with. But, these designers are trying to create stunning product finishes in 2D software without the ability to visualize it in 3D. That is until a finished sample comes back from the factory, which could be weeks or months down the road.

"If we could build a bridge between Illustrator and KeyShot and we could get high-resolution, real-time renders to be real-time, then a designer could jump back and forth between 2D and 3D to dial in their design."

"We knew one thing," says Mike James, Managing Principal at TB&O. "If we could build a bridge between Illustrator and KeyShot and we could get high-resolution, real-time renders to be real-time, then a designer could jump back and forth between 2D and 3D to dial in their design. They could see how their design interacts with the lines of the product and, they could see how light behaves as they move their product around in a 3D space." Of course, on top of this, they would be free to run more “what-if” scenarios, discover a wider array of product variations, allowing them to be even more creative.

When GPU rendering became available in KeyShot, TB&O started using the NVIDIA RTX series of GPU cards in their desktop workstations. "Our minds were blown, explains Mike. "Today, 90 percent of our renderings are done using the NVIDIA GPUs. The new NVIDIA® RTX™ series cards when linked together give us 48GB of GPU memory which is more than enough to process, at lightning speed, our most complex KeyShot materials and light environments." He describes the new graphic cards as "mind-bendingly fast" which has drastically reduced the wait time for renderings thus improving their efficiency, allowing them to do more work in the same amount of time. With their time, which is their product, more work in less time is a great thing. 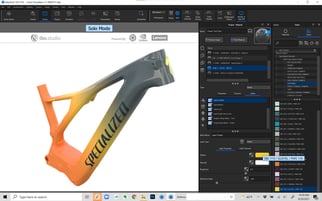 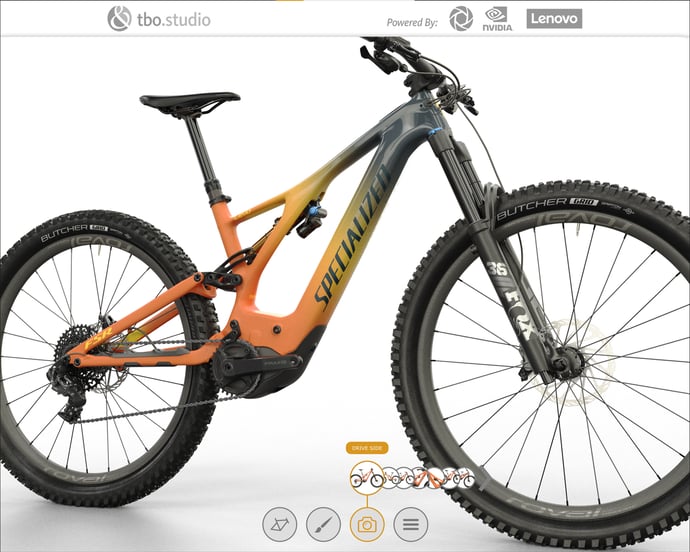 The GPUs added the power but the workstations at TB&O were cost-prohibitive for most client design applications. The typical Industrial and Graphic designer at a TB&O client uses a laptop with an auxiliary monitor. So, GPU processing with NVIDIA RTX cards enabled the creation of a powerful new workflow for designing graphics on complex, asymmetrically shaped products. But, with Design Visualizer, 2D to 3D real-time product visualization was possible, and could be a game-changer, but was only available to people with large, expensive desktop workstations. TB&O has been at the forefront of visualization and knew, however, it was only a matter of time before this would change.

"We weren’t deterred by the notion that only people with machines like ours could do what we could do, says Mike James. "We built a workflow to seamlessly work between a 2D design space and real-time 3D visualization. Expensive GPU cards in large, heavy, and expensive desktop workstations were going to inhibit the implementation of this revolutionary way of designing products. We knew that but we knew that technology would get smaller, just as surely as it will get faster. There are some server and cloud-based alternatives, but the commitment, planning, and implementation of those seemed like a barrier to broad availability throughout a department or across departments." 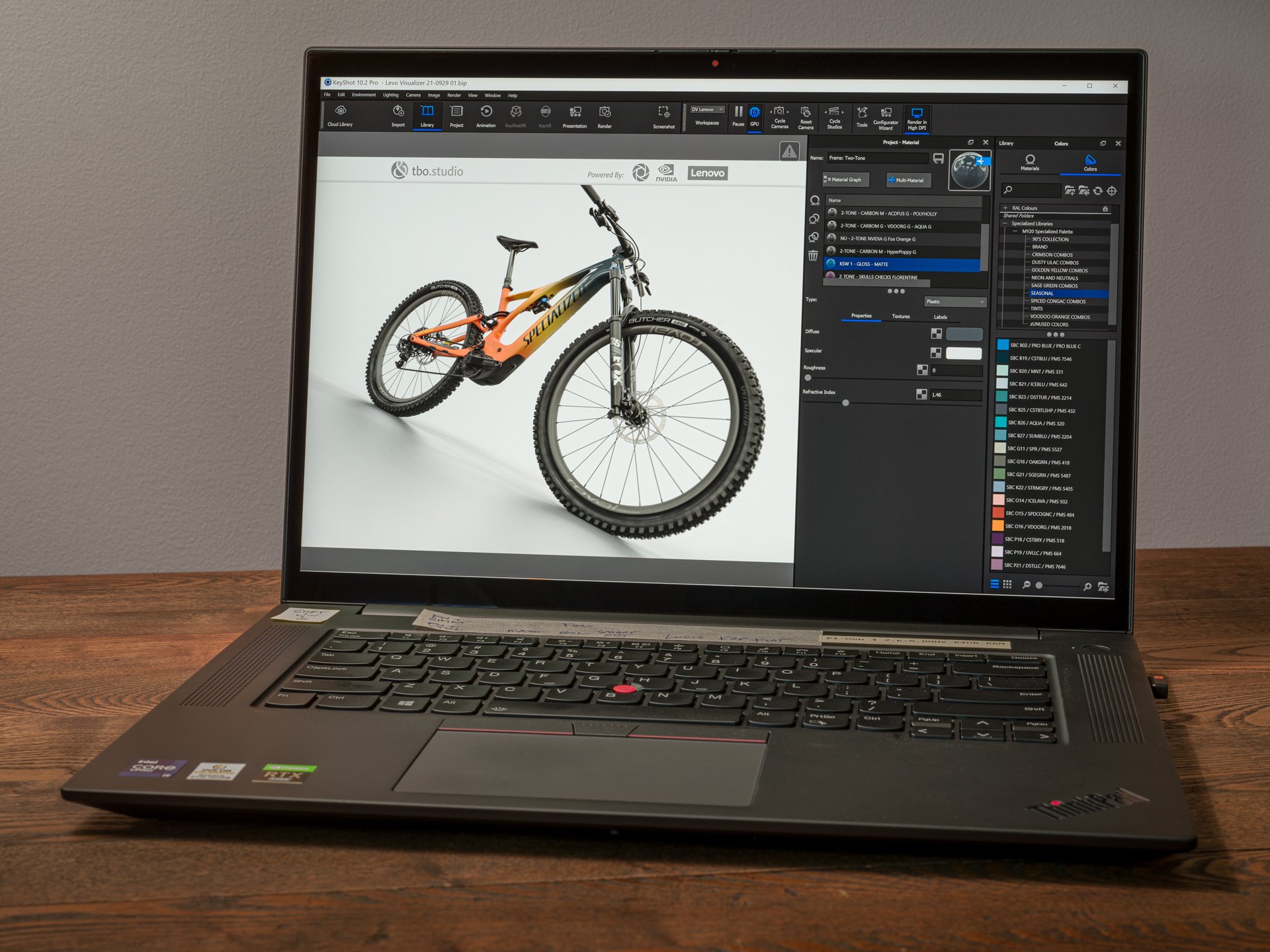 Fast forward to now, the availability of an NVIDIA RTX A5000 GPU chip in a portable, mobile workstation, such as the Lenovo® P1 Gen 4, makes it possible to equip a designer with the power they need to see their 2D designs come alive on a 3D model faster than lickety-split.

"NVIDIA and Lenovo have been great partners in our quest to render faster, with a smaller footprint and for less equipment cost, " continues Mike James. "Lenovo provided us with a pre-production machine to test our Design Visualizer workflow and validate that the power our clients needed was now available in a mobile solution. When we started demoing the Design Visualizer with the Lenovo P1 Gen 4, even over Zoom, client interest was peeked. "

Changing the Future of Design Visualization

"The NVIDIA RTX A5000 chip now available on laptops such as the Lenovo P1 Gen 4 are cost-effective mobile solutions for anyone who needs to do real-time, photo-real visualization with KeyShot."

The NVIDIA RTX GPUs change how efficiently TB&O can process KeyShot renderings in the studio on desktop or networked machines. And now, NVIDIA RTX GPUs change what they can do on laptops in an airplane seat at 35,000 feet...  Or, on a train, or anywhere their work takes them.  "The NVIDIA RTX A5000 chip now available on laptops such as the Lenovo P1 Gen 4 are cost-effective mobile solutions for anyone who needs to do real-time, photo-real visualization with KeyShot. It’s astounding to see this technology arrived as fast as it did."

It may seem like a leap to say it’s possible to visualize in real-time with KeyShot on a laptop what you can on a desktop computer. In their tests, two RTX A5000 GPU cards linked in a desktop were considerably faster than a laptop with a single RTX A5000 chip. However, they found, and their clients agreed, the RTX A5000 chip is plenty fast enough with the added benefit of its portability.

There are two ways TB&O analyzed the real-time, photo-real rendering using the A5000 chip. First, they allowed the screen to res up, noting how long it took to get to an acceptable level of clarity. This bike model is complex with 26.5 million triangles and 64,000 NURBS. Yet, in most instances, crisp, real-time rendering is achieved in about 10-15 seconds. This astounded the team.

Next, they captured how long it took the scene to reach a certain number of samples with the RTX A5000 chip on the mobile workstations and compare that to the RTX A5000 card on the desktop workstation. Using this same compute-intensive file, the RTX A5000 chip took 3:07 minutes to reach 256 samples. A desktop computer running one RTX A5000 card took 2:13 minutes. Again, this seemed astounding. On top of this, the relative relationship held true for 512 samples and 1024 samples, as one would expect.

Mike James says when comparing the specs, "the RTX A5000 card has 24GB of memory available whereas the A5000 chip only has 16GB. This effectively means that, as materials get more complex and compute-intensive and as challenges such as depth of field are added, the RTX A5000 card is going to handle the job considerably better. However, what the Lenovo P1 with an RTX A5000 chip does for 2D to 3D design visualization is game changing." 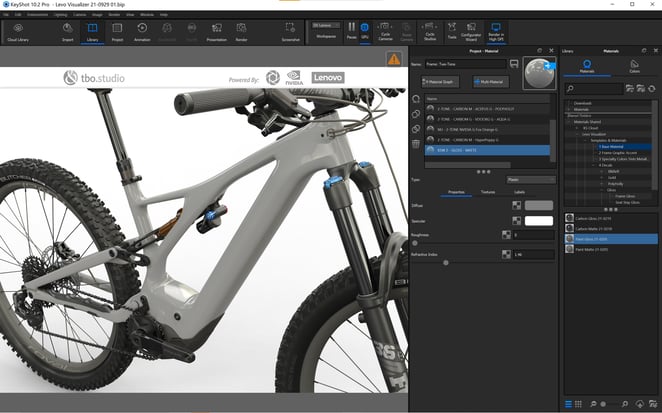 The Specialized Bicycle comes in at 26.5 million triangles and 64,000 NURBS, easily handled in KeyShot on the Lenovo P1 with GPU mode utilizing the NVIDIA RTX A5000. Image: Thomas Burke & Others

Giving Clients What They Want

The new hardware and workflow have worked together to make real-time, photo-real product visualization mobile, collaborative and cost-effective. This has most drastically changed what TB&O is able to do for their clients, "It changes where we can work and how fast we can work, says Mike James. "Quite frankly, it has put the power, to visualize the product that will come from the factory, long before it comes from the factory, in a lot more hands than ever before. Because of this, we have several clients that have asked us to work with their product design teams to create workflows that make their designers more efficient and frees them to be more creative."

It has downstream effects as well. For TB&O, this means that what they get from the client to produce marketing collateral, or video and interactive content, is going to be a lot closer to the real thing. That both saves them time and gives the client what they need, faster.

"KeyShot is the linchpin to be able to visualize a photo-realistic render of a product."

It was natural to want to find a way to put this in the hands of people designing visuals for complex, asymmetrically-shaped products. "We just needed to bring power to the people for this to be fully realized," says Mike James. "A GPU chip in a laptop that can handle ray-tracing does this. KeyShot is the linchpin to be able to visualize a photo-realistic render of a product. It is the simplest, best, and fastest solution to see what something is going to look like before it is really something."

They experienced benefits for the business as well. "We essentially sell our time, explains Mike. "So, if we can render faster, and we can render more frames for videos and interactive experiences, we can be more creative in what we render. If we can render in an hour what used to take a week, we’re apt to take more creative risks and push the envelop a bit further. This is the power of GPU processed rendering."

It has also opened up a new opportunity for TB&O to work with clients to set up workflows that make their design process more efficient, allowing their designers to be more creative and collaborative using laptops with GPU chips that can process nearly instant KeyShot renderings of their ideas. "The ability to seamlessly move between a 2D design app like Adobe Illustrator and 3D visualization software such as KeyShot is, what in the good old days, what we’d call a 'paradigm shift'," Mike says with a slight cringe at the term. "It's really so much more. Sketching in Illustrator and then jumping over to KeyShot to immediately see how it looks on the 3D model, spin it to see how light behaves, and then jump back to make changes in Illustrator.  This is a powerful workflow that is made possible by these new RTX chips from NVIDIA and the P1 Gen 4 laptop for Lenovo.  All of this helps us because we can take files of the approved designs and produce the marketing collateral quicker and less expensively than we ever have before."

"All of this helps us because we can take files of the approved designs and produce the marketing collateral quicker and less expensively than we ever have before."

1. Graphics layouts can be worked up in 2D applications such as Adobe Illustrator and then visualized in real-time in KeyShot. 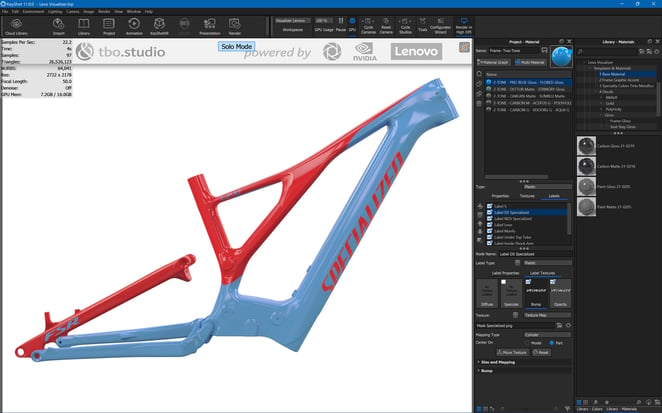 2. The 2D graphic design comes alive in KeyShot where the graphics and paint are applied accurately to the CAD model with realistic light behavior and accurate colors from the client’s library.

3. Toggling components on and off with KeyShot Solo Mode allows the designer to see their graphics in the context of the whole product. 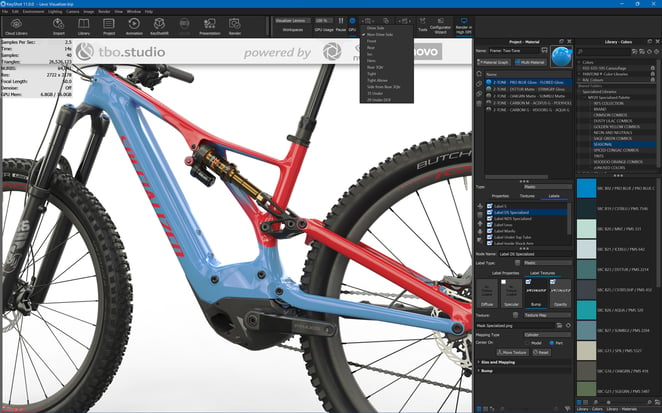 4. In KeyShot’s 3D space it is easy to move the product around ad hoc or by selecting existing cameras.

5. Design reviews are made easy using the KeyShot Configurator and Presentation Mode.

6. Presentation Mode lets a designer show only what they want their audience to see and it is easy to navigate with a mouse or a touch of the screen.